The International NPUAP-EPUAP pressure ulcer definition is as follows:

A pressure ulcer is defined as a localised injury to the skin and/or underlying tissue usually over a bony prominence, as a result of pressure, or pressure in combination with shear and friction.

There are a number grading systems used by healthcare professionals to describe the severity of pressure ulcers. The most common is the NPUAP-EPUAP grading system, which is outlined below.

Pressure ulcers are the result of sustained external forces being placed on a particular part of the body.

The application of external forces such as pressure, shear and friction interrupt the blood supply to the affected area of skin meaning that vital elements that keep tissues healthy such as oxygen and nutrients are restricted and without a constant blood supply, tissue is damaged and will eventually die and a pressure ulcer form. 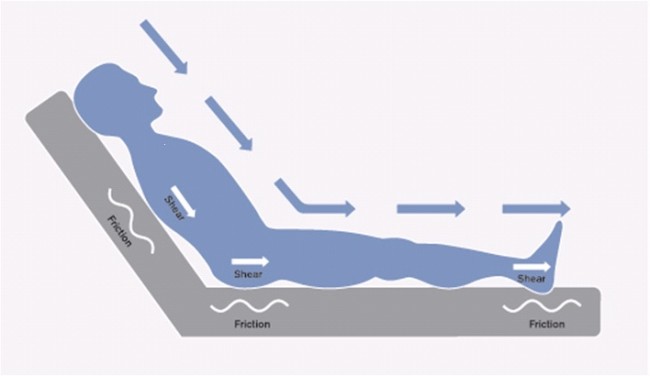 Applied local or point pressure compresses and distorts the body tissue between the support surface and a persons bony prominences causing the occlusion of capillary blood flow resulting in tissue damage.

Deformation and shearing of soft tissue occurs when forces moving in different directions are applied to the same tissue mass. For example, as a person slowly slips down the bed, the mobile skin slides over bony prominences causing stretching and deformation of blood vessels, leading to the development of ischaemia. Shear is an important causative factor in many sacral and heel ulcers.

Friction is the resistance to motion of the external tissue sliding in a direction parallel to the support surface. Friction may contribute separately to pressure ulcers by stripping superficial skin layers and causing ulceration. The heels are especially at risk particularly when a person is being repositioned up the bed. Usually occurs at anatomical sites subjected to frequent friction e.g. the heels or sacrum. Causes external skin damage, such as blistering or breaks.

Incontinence of urine and faeces can contribute to pressure ulcer formation around the buttocks, sacrum and hip regions. The moisture can lead to maceration and the urine and faeces act as skin irritants that promote skin breakdown. 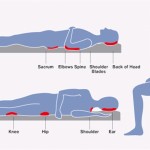 Importance of Complete Removal of Pressure

The need for total relief of pressure has long been recognised. Over 40 years ago, Kosiak concluded from his experiments on the effect of sustained and dynamic pressures upon the initiation of pressure damage in muscle tissues that “since it is impossible to completely eliminate all pressure for a long period of time, it becomes imperative that the pressure be completely eliminated at frequent intervals in order to allow circulation to the ischaemic tissues”.

Kosiak also showed the link between pressure and time in the constant pressure group.

“The application of alternating pressures, whereby the tissue was completely free of pressure for five minute intervals, showed consistently less change or no change when compared with tissue subjected to an equivalent amount of constant pressure. This was true even at pressures as high as 240 mm Hg for 3 hours…” 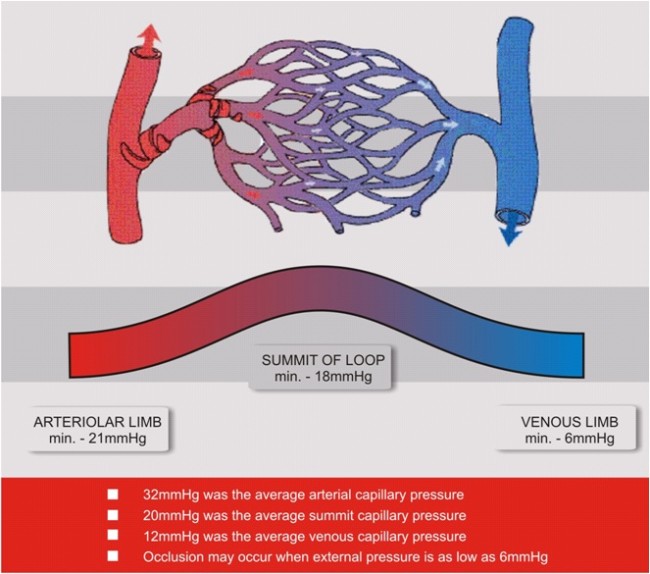 Landis in the late 1920’s among volunteers, and replicated by Williams in 1988 showed the range of capillary pressures that could be measured following various challenges to the peripheral circulation. His work was clear that there was no single constant capillary pressure given that heat, cold and other challenges would markedly change the pressure within the capillaries.

Pressures as low as 6mmHg stopped blood flow, therefore pressures would be likely to reduce if his experiment was to be repeated using elderly ill volunteers.